Shock. Stunned. Heartbroken. Numb. There is not even the right word to describe the pins and needles feeling that takes over the entire body of a sports fan, whose team has just lost. The rush of emotions that includes sorrow, and often anger.

National pride in Canada is often showcased at its best through sports. Canadians are mostly easy-going with regards to many issues, but start talking about sports and the Canadian sports fan will show you some passion. They are not afraid to shed a tear after a loss and will cheer and chant proudly after their country’s win!

GOOOOOOOOAAAAALLL! at the Live Viewing Fan Zone in Vancouver

We were proud to be among over fifty thousand fans, most of them there to support their home country of Canada, in the FIFA Women’s World Cup quarter finals in Vancouver in June. Our bodies swelled with pride, despite the loss to the National Team from England. 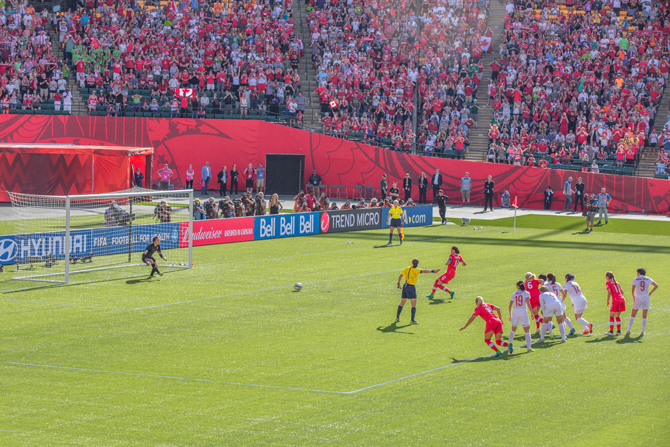 While the Canadians collapsed to the turf in exhaustion, in tears, and in anguish, the English celebrated to a stunned crowd and only a few hundred cheering fans. Their shouts of joy couldn’t be heard, as the ringing in the ears of the shocked crowd, stared at the turf in front of them. But there is something amazing about Canadians, and we were lucky enough to bear witness to it on that day in BC Place Stadium. 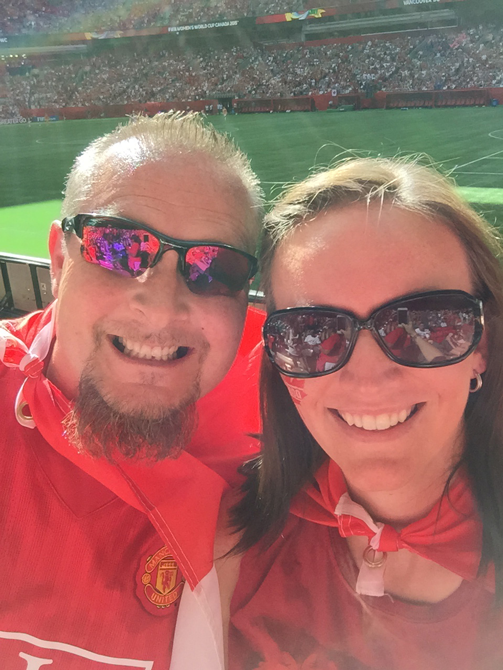 Raimo and I have always loved watching sports. We traveld to watch the Men”™s national soccer team play Brazil in Seattle which ended in a 6-5 win for the Brazilians. We were fortunate enough to win the lottery for the Men”™s Olympic Hockey Gold Medal Game in Vancouver, and got to watch the Canadian Men beat their USA rivals on home soil. We have gone the Las Vegas to attend the NHL Awards for hockey. We love watching sports on TV. Its something we enjoy; we love cheering when our team wins, and we are disappointed with each loss. When the FIFA Women”™s World Cup came to Canada, it was just natural as a Canadian sports fan, that we would go to a game. I chose the Semi Final in Vancouver and as I read the schedule backwards, there was a chance that we would see Canada! We were in luck. Canada would face off against England.

Unfortunately, it was not the result that the fans wanted, but instead of moping their way out of the stands (as you see after MOST home team losses in professional sports), while the 11 women on the field collapsed to the ground, the cheers started.

Every Canadian sports fan in the stadium stood in their seats cheering in unison for our team, despite just witnessing the heartbreaking loss. The stands didn’t empty. The fans didn’t want to go home. Was it shock, I’m not sure. We wanted more. We didn’t want to admit defeat for those 11 ladies who played their hearts out. So we cheered. 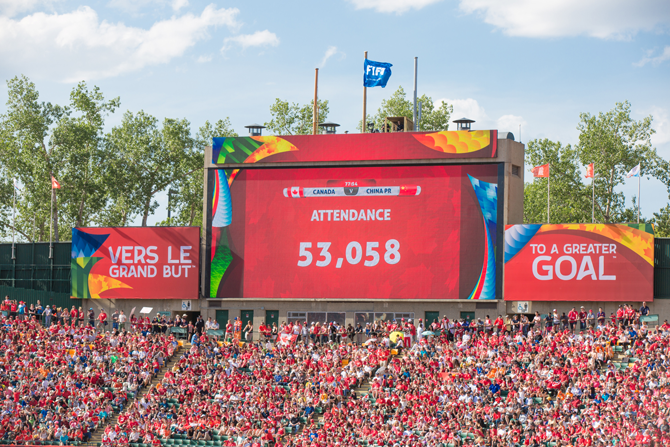 Writing this brings tears to my eyes, pain in my head and a knot in the pit of my stomach. The anguish of defeat still fresh in my mind as if it was yesterday and the pride I felt to be among mt fellow Canadians as we brought those women to their feet!

Wherever we may travel, I will always be proud to wear a maple leaf on my pack, proud to support my country in sport, and proud to be a Canadian. 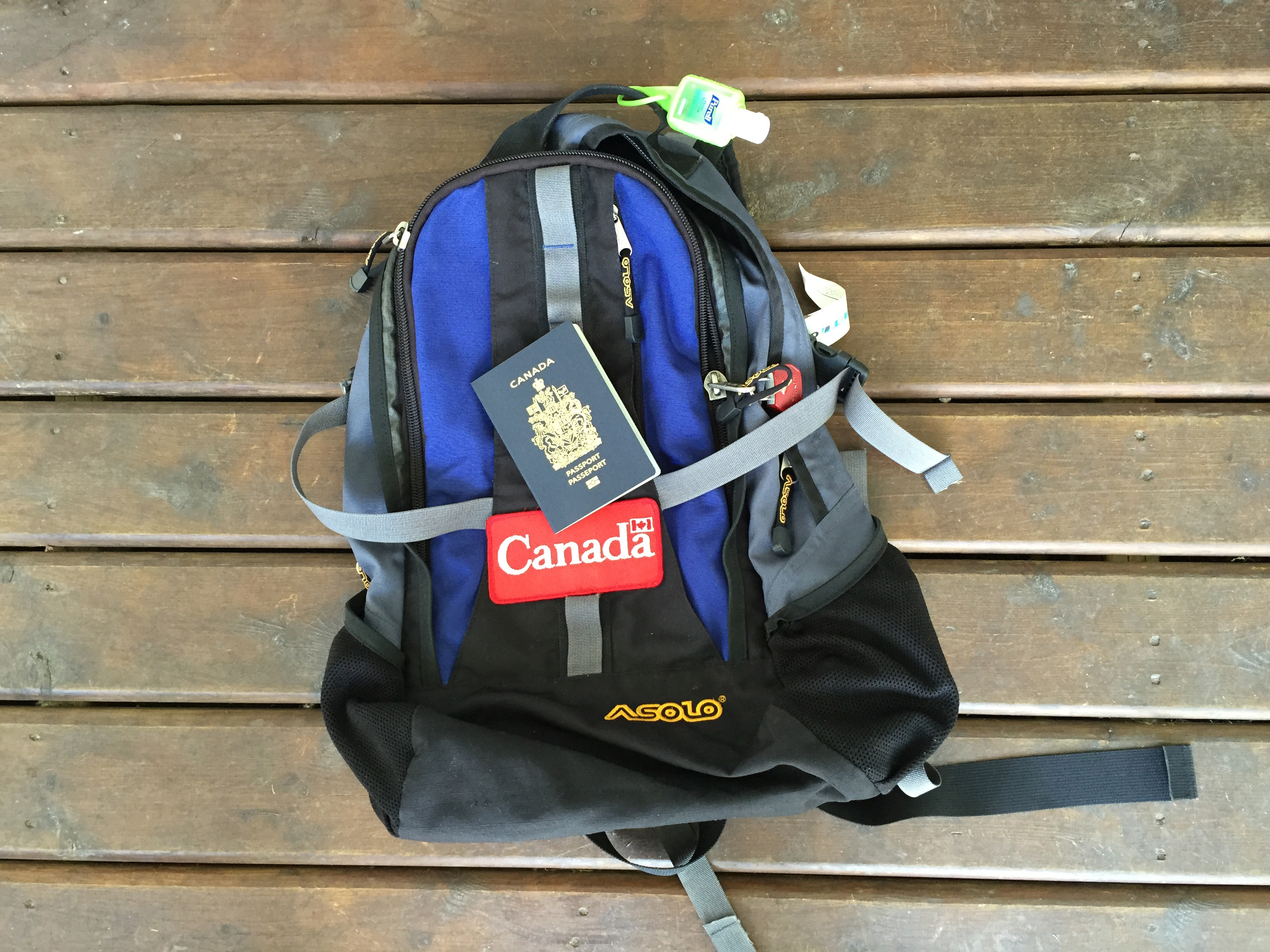 [su_frame]If you found this page helpful, i would love it if you would pin, share or tweet it on whatever social media platforms you use! Every little bit will help us fund our travels and continue to bring great content to our site![/su_frame]

You can hover over these (or any image on my site) to quickly… pin it… ! 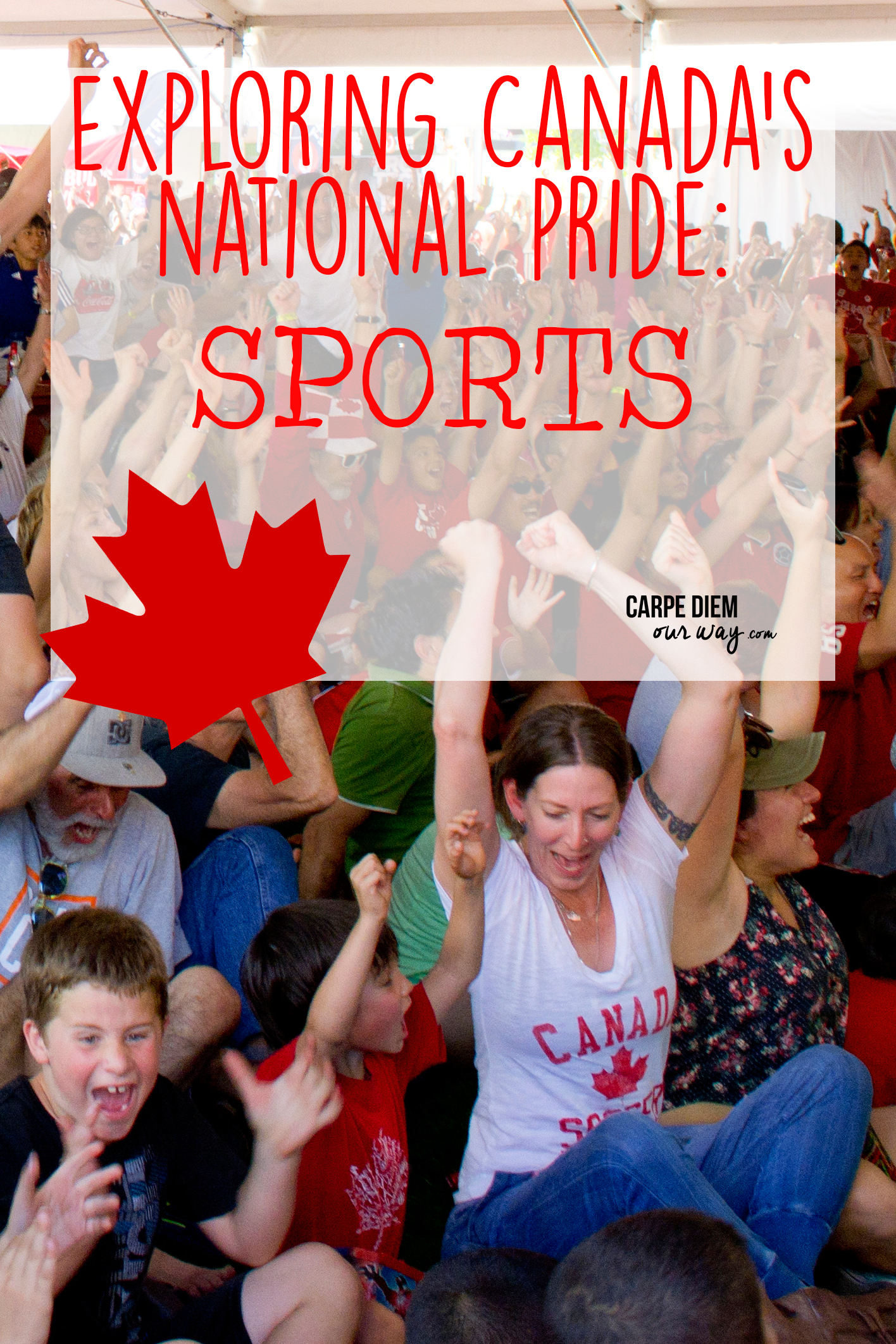 I'll have to check out a game one day in Canada to see how sports fans there compare to Aussies! And I'm with Melissa on not knowing why cricket is so popular ....hahahaha <3

Though the U.S. team was my top pick for the Women's World Cup, I was definitely cheering for Canada as well as the host country! You guys definitely put up a good fight!

I am Canadian... and yes, we are big sports fans! :) Currently in Australia, I don't understand why cricket is that popular... Haha!

As a native of Pittsburgh, Pennsylvania I definitely understand your passion. I lived in Chicago for 7 years and I was lucky to have a choice of several places to watch my Pittsburgh Steelers or Penguins play each week. I'm glad you had this opportunity to witness the pride you share as a nation! What a wonderful experience.

How cool to experience this! I'm not a big sport fan but I have attended baseball games to see Dodgers in California so it is exciting to be a part of the audience in the stadium. The vibe is exciting! It is really interesting to see this part in Canada because I've always thought hockey was the biggest thing over there but it's great to see other sports.