What is it Like to fly on Air NZ Skycouch?

Air New Zealand has been showcasing their economy skycouch for a few years now. From the moment I saw the first ad for it, I knew I wanted to try it. The opportunity presented itself on our last flight on Air New Zealand from Auckland Airport to Vancouver Airport in Canada.

For an extra $200, I was able to book seats in the Air NZ skycouch section, allowing me to turn our three seats into a bed to lay down on. It sounds like a dream right? The ability to not be vertical on a plane. The ability to stretch your legs straight. The ability to allow my children to lay down comfortably and sleep on our 14 hour, overnight flight from Auckland to Vancouver.

Here is everything you wanted to know about the Air New Zealand SkyCouch and a review of all of its features! 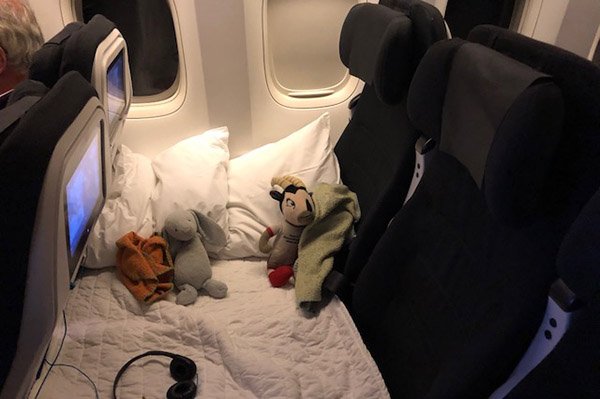 How much extra is a SkyCouch on Air New Zealand?

Well that depends. If you are three passengers travelling together, as I already mentioned, for an additional $200 you can add the sky couch to your economy seat booking (providing it is available). The added footrest is only available on a certain number of seats.

Note that these seats are in Economy Class. They are not in their own section.

If you are two passengers traveling together, you can purchase the third seat for 50% less than the single seat price and be guaranteed all three seats for the two of you.

If you are one passenger, It will cost more. You should probably look at going up a class if you want the added comforts.

I was excited to be trying the Air New Zealand skycouch out for the first time when we travelled to Auckland from Vancouver on their non-stop route! The photos show two adults, snuggled together comfortably on the sky couch while the rest of economy class sits in upright chairs. 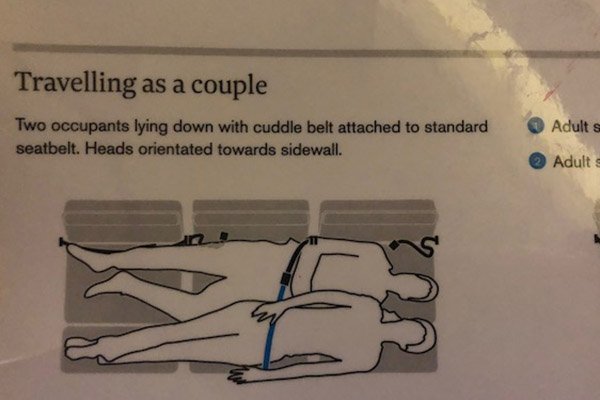 The Air NZ Skycouch showing two adults stretched out on a skycouch bed. You would have to be less than five feet tall to actually straighten your legs ALMOST as straight as this.

Well, my experience was not as comfortable as theirs. My boys are 6 and 4 and about typical for their size. When I tried to lie down with my 6 year old, it was much more of a tight squeeze than I thought. The reason is that the three people in front of you will likely recline their seats. While you can recline yours as well, but it does not give you more room, because mostly the top reclines, but when someone reclines in front of you, it significantly reduces your space near the tray table (where I happened to be laying). I felt quite squeezed with the seats in front of me and my sleeping 6 year old. Do not get me wrong, it was better than sitting up, but it was squishy. I am about 150 lbs and 5”™5.” 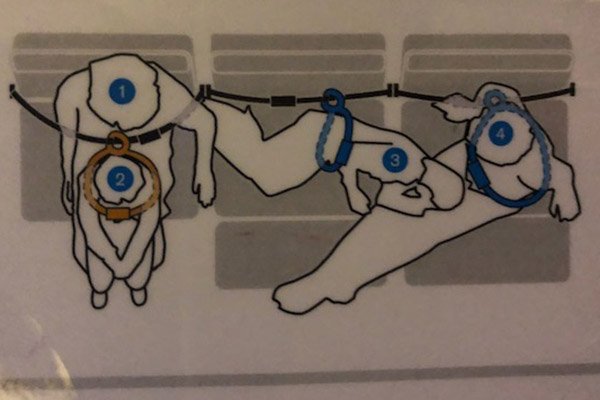 Being able to stretch out your feet like this was a huge benefit in comfort! having stiff legs is such a pain!

Now when you add in the fact that I also had a 4 year old, where is he supposed to go. What I had tried to do, was put the two of them laying down with their heads at the window and then me sitting in the third chair. But what happened, and what worked for us, was both of them curling up on the chair (with the added foot rest brought up to the end of the chair, they had much more room than a typical seat. I was able to sit at the aisle, put on my compression socks, put my feet towards the middle and my 4 year old put his legs on top of mine. This would have probably been better for me If I could have propped myself against the window, but my 6 year old was there. Ideally with a child, you would sit propped against the window and then they could lay in the remaining area. But let me remind you, it is squishier than it seems. Moving around on your “bed” is not as easy as you may think. 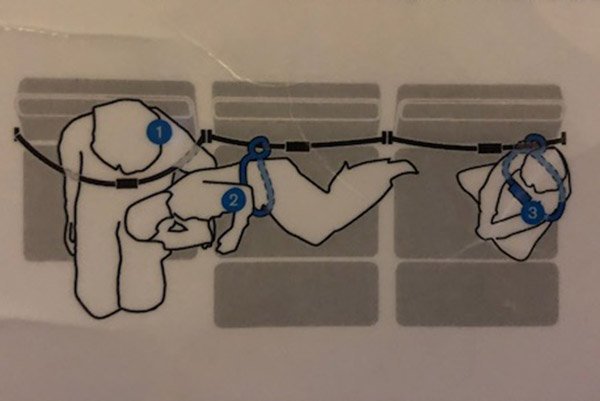 Air NZ Skycouch suggested situation for children. I loved the seatbelt and wish every flight offered these for kids!

I wish I could have had them both sleep with their heads by the window, but my 4 year old refused to lay there and wanted his seat. But despite the challenges of figuring out how to get comfy overall, it worked for us. And was more comfortable than a regular seat where I end up in the middle and they both lay on me.

Another great thing for little ones, is my 4 year old is the perfect height to kick the seat in front of him. Not maliciously, but enough to really piss you off if you are in front of him. Asking him to sit “cross-cross” on the seat is not ideal, nor is it comfortable and I often end up having him bend his knees and put them to the side, where I can hold his feet or lay his feet on me. 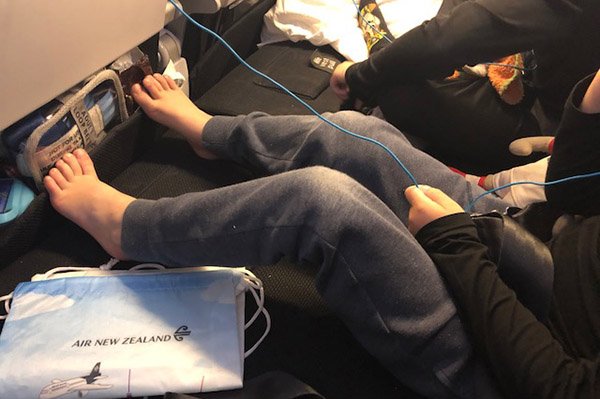 The Skycouch on Air New Zealand was much comfier for my four year old. Instead of dangling and hitting the seat infront of him, he could be much more comfortable.

With the Skycouch, the foot rest that pulls up was perfect for him to stretch his legs, and they were no longer hanging down, able to kick the seat in front. HONESTLY, this was probably my favourite surprise from the seats! Even pulling the foot rest up to a 45 degree angle was much more comfortable for me. I don’t know why all seats do not have this foot rest. 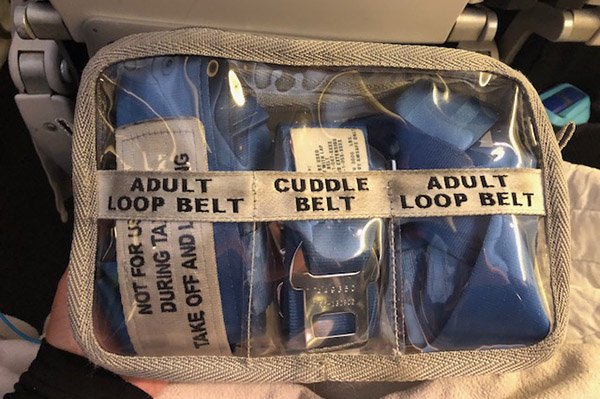 When you get to your seat, you will have a big package with a blanket and larger pillows. These were sure nice! There are also instructions on how to raise and lower the foot rests, and when they could be used (pretty much the whole time except take off and landing).

After takeoff, the crew will drop off a special seatbelt you can use when you are laying down. This is nice so that you do not have to sit up if the seatbelt signs come back on. I always wondered how this worked and I was happy that they had come up with a great “work around” for turbulent times. 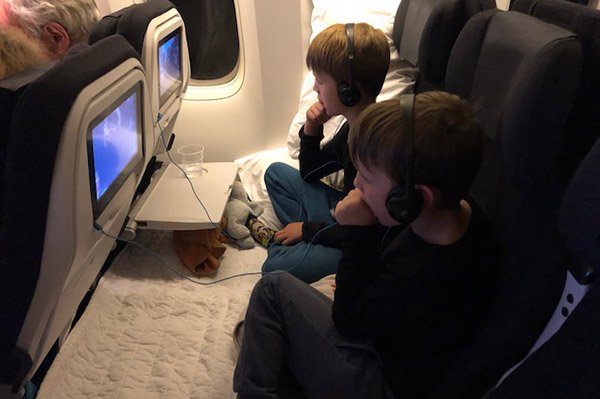 Would I book a sky couch on Air New Zealand again?

For the $200, the benefits of my kids sleeping better on a 14 hour flight was worth it. Ideally I could have popped into a nearby empty seat, but the entire plane was full. I would make sure I sit by the window next time I think, but then again, both kids could curl up on their seats and I was able to access the aisle much easier from the aisle seat. I did get an hour or so laying down with my head at the window beside my 6 year old, as he and my 4 year old occupied the seat part and I squished into the foot rest part with my back at the tray tables of the reclined seats in front of me.

It is not first class, nor for $200 should I expect it. It was a nice upgrade form economy with a comfy blanket, full size pillows and a little extra room for my kids to stretch out and even play. Definitely worth the price when it was not even 10% extra on the cost of the tickets from Auckland to Vancouver. 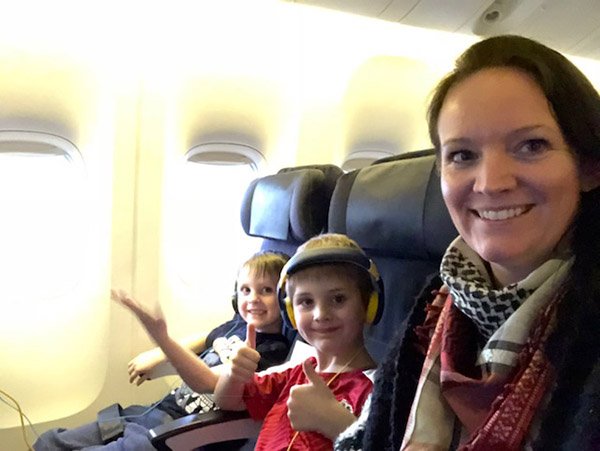 I am lucky that my kids love flying!

How to Book a SkyCouch on Air New Zealand

If you are booking on the Air New Zealand website, after you start the booking process, it will give you the option of upgrading to a sky couch. If it does not give you the option, then it is likely already sold out. I would recommend that if you are considering it, that you book it when you book your seats, as the available sky couches were sold out 6 months before our trip (when I booked our tickets) on one flight, but were available right up until departure on the other. 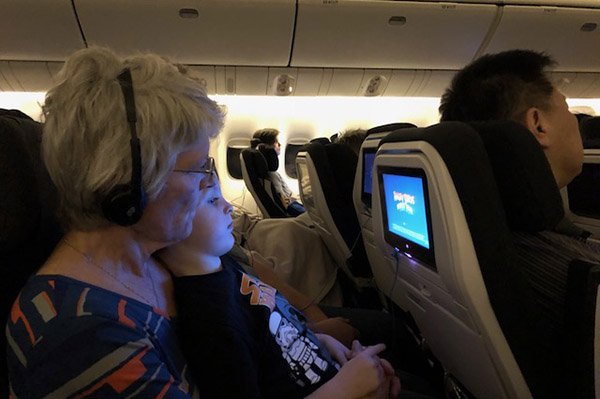 The price does not go down as it gets closer to departure, nor does it go up, if you have already bought the three seats. But if you have just two tickets, the third will be 50% of the price, so you know when you book it that that is the price for the third seat.

If you book through a travel agent, you may or may not have the option of them adding the sky couch for you. It is the same if you book on a third party website. But you can always go direct to Air New Zealand and add it. 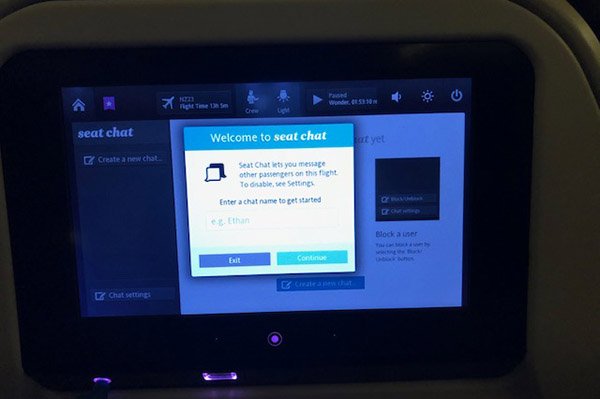 Air New Zealand offers an excellent entertainment system with more than just movies. There is seat chat, driving in NZ information and more!

Other Amenities on Air New Zealand besides their Economy Skycouch

Air new Zealand offers excellent service on their routes. Their entertainment options are excellent, with plenty of games, information on their wine selection (yes they have a full selection, not just red or while), the latest movies, and cool features such as seat chat. If you are not seated with your entire family, or are in a large group, this is a nice way to be able to send a message to someone in another seat rather than trying to sneak out of the window seat while the person beside you naps!

If it is your first time to New Zealand, you can also read about driving in the country and some common street signs etc. I have also written a post about road tripping New Zealand here that you will likely find helpful. 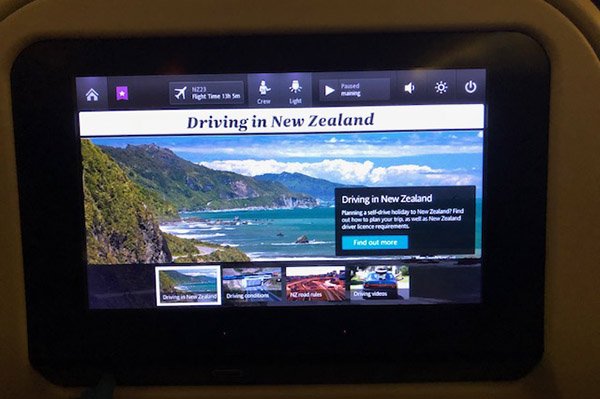 If it is your first time in New Zealand, read the handy driving information on Air New Zealand’s entertainment screen

Because we were going to be Roadtripping New Zealand on arrival, we packed the car seats with us on our trip. Check out this post on the Best Car Seat Travel Bag to see how we pack our car seat and booster seat!

Have you ever flown on Air New Zealand and taken advantage of their economy sky-couch upgrade? I would love hear about your experience in the comments!