We arrived into Athens and had arranged for our AirBNB host to pick us up at the airport. It seems as though a lot of the hosts near the airport offer this service. A 10 minute drive and we were in Artemis, a popular beach town for Athenians to get away from the city on the weekend! We arrived on a Saturday night and it was packed! It was fun to watch all of the people enjoying the beach and we wandered the town in search of some snacks, which were not hard to find, a donut costing Mattias 0.80 euros and an ice cream just .40 euros. 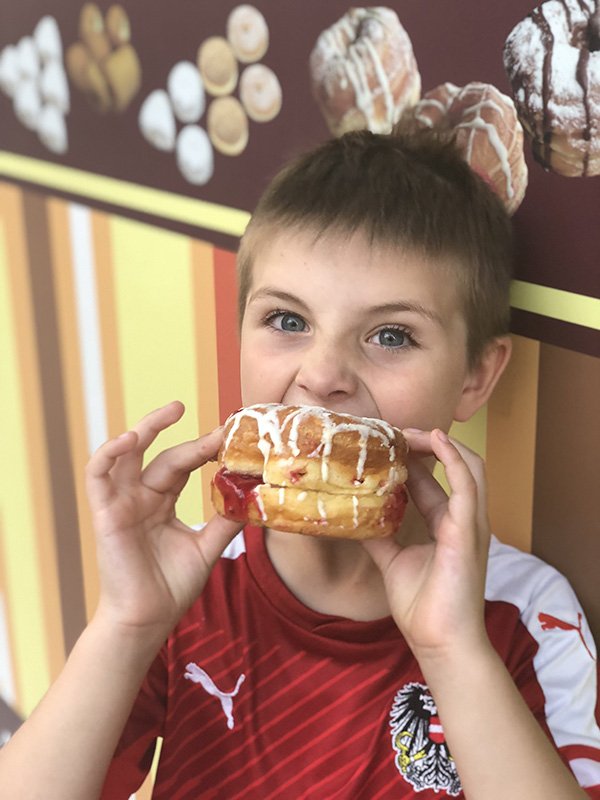 Upon arriving into “Artemida” or Artemis if we anglicize everything, we headed for some snacks! Tiny Ice Creams and Doughnuts, as well as feta filled pastries were had!

Our AirBNB was about 10 minutes from the beach and if we were not headed to Meteora, it would have been a great base to enjoy Artemis! If you are looking for a great host, with a great price, and airport transfers, let me know and I will put you in touch with Charis! 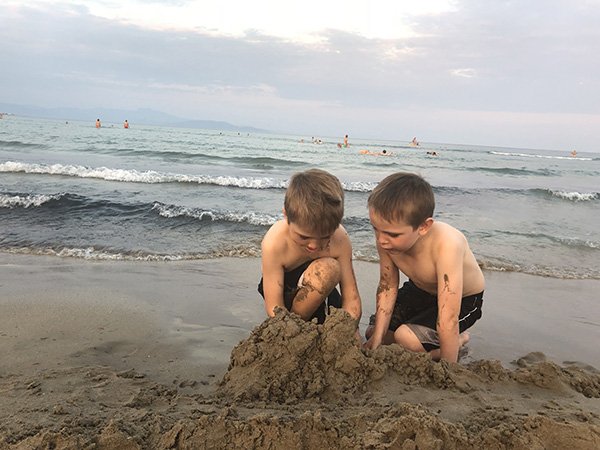 Artemis Beach, where Athenians come on the weekends, the water was shallow, the beach was nice and ordering drinks from a lounger was a nice treat!

If you have more time in Athens, check out this Quirky 72 hour Athens Itinerary

Travel to Meteora from Athens

The 33C weather in Athens, quickly cooled, as low as 17C and we hit thunder and lightening and muddy water cascading over the hills in the mountains on our way north.

If you want some more road trip ideas, check out this Greece road trip post. 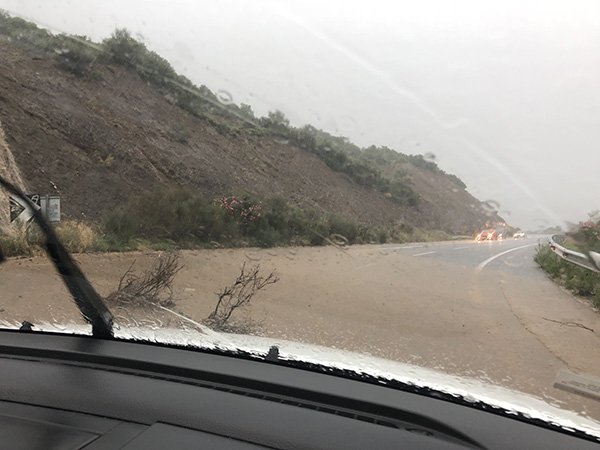 It took about 4 hours and several toll booths to reach Meteora, our destination for 2 nights. The town below the monestaires , known as Kalampaka, was a perfect way to soak up real Greece.

Markus fell in love with Toast, which is basically a grilled cheese sandwich, but OHHHH soooooo good with lots of cheese inside!

For 2 Euros I was able to get one of the best tasting Latte’s I had ever had. It was much cheaper than I had thought, having recently been in New Zealand and last summer road tripping France and Switzerland. Mattias had a muffin for 1 Euro. I guess I am used to Starbucks prices! For 7 Euros we had a fulfilling breakfast, better than the 5 Euro per person cost for the hotel breakfast.

The first thing that caught my eye was the hotel pool, next to the parking lot, no fence, no gate. Unheard of where I live, where lawsuits are the reason for so many safety measures. And well, I wouldn’t want my kids wandering around town not knowing how to swim. 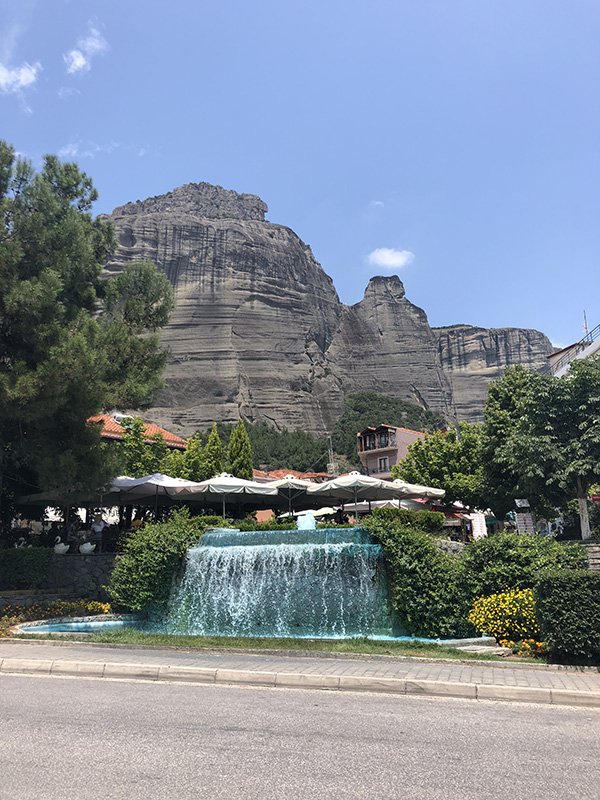 The view of Meteora from Kalampaka. Kalampaka is a small town that can be explored in a few hours. We enjoyed the cheap eats and great coffee!

As I mentioned above, we had arranged a tour with Visit Meteora, a great way to get from one Monastery to the next without having a vehicle. What I enjoyed about having a tour was that you learn little tidbits from your guide, things you would not have known otherwise, unless you did your research on the area, and that usually means going beyond just a guidebook. I find that the kids pick up things from the guides, and they enjoy having a stranger to talk to. They are definitely NOT shy!

Meteora also has monasteries for women. Something I didn’t know existed. Most women living there are young, and very well educated.

The steps to the monasteries are modernity’s conveneince, and so tourists can easily access them. It costs 3 Euros to visit inside each one, money that they use to sustain their way of life. They are completely independent from the state and are basically autonomous. They could close the doors to tourists any day they want, and no one could say anything about it.

Some of the monestaties have hundreds of steps, I was thankful for the cool weather from the storm the day before. It was only mid 20s, and wearing a long dress, I was happy for the reprieve from the hot Greek weather. 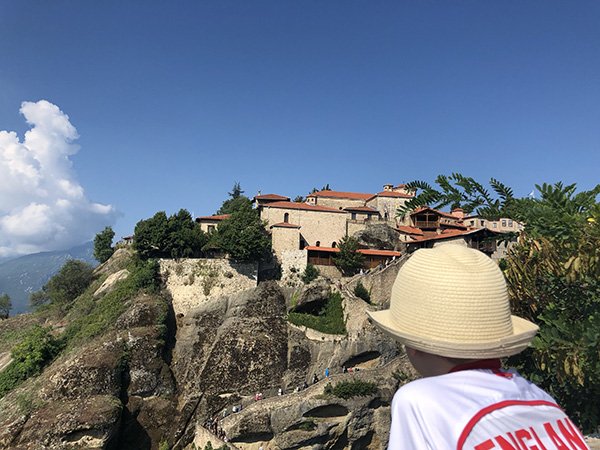 The rain stopped and the sun came out for our Meteora Tour. It is nice taking a half day tour to explore the site, but giving you time to relax in Kalampaka after!

What to wear in Meteora

If you arrive to the monasteries with shorts, they do offer wraps to cover your legs. I brought my own shawl for my shoulders, rather than relying on them having one to borrow.

Some of the monasteries sell honey or other souvenirs, another way to provide for their needs. 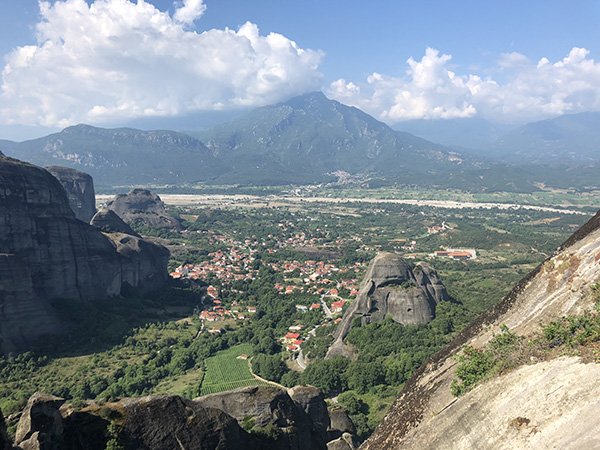 300 meters above Kalampaka are the Meteora Monasteries

How much time to spend in Meteora

Half a day in Meteora with our tour was fine to see three of the monasteries, and the Visit Meteora tour was the perfect length. The tour ended at 1pm and we were able to wander Kalampaka in search of good Greek food. Besides going inside three of the monestaries, we stopped a few times along the way to take in the stunning views of these buildings atop the mountains, and the city down below

We found Moussaka at kalampaka restaurant. It was right on the tourist strip, but good food. I was surprised at the prices in town, despite being right in the middle of hotels, the prices were quite reasonable.

A big bottle of water was 1 Euro or less most of the time, and I purchased a sim card for 10 Euros for 5 GB of Data and a few minutes calling. I think I paid triple that in France for a sim card last summer.

Our trip to Meteora was short, we headed back to Athens the next day to get our flight to Santorini. 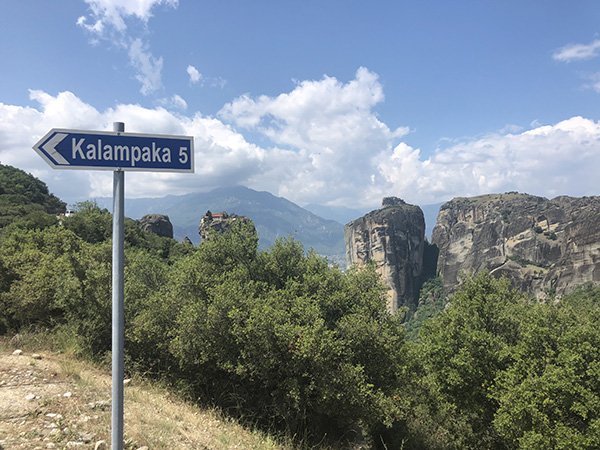 How to Get from Athens to Meteora

There are several ways to get to Meteora, including train, bus and car. Having kids, I like the flexibility of having a car sometimes, and since we were not downtown Athens, I had not researched where the train station was. Driving is probably the most expensive way to get there, but we were free to stop where we wanted.

Kalampaka, the main town outside of the Meteora Monastaries is 350 km away from Athens, 238 km away from Thessaloniki and 146 km from Volos 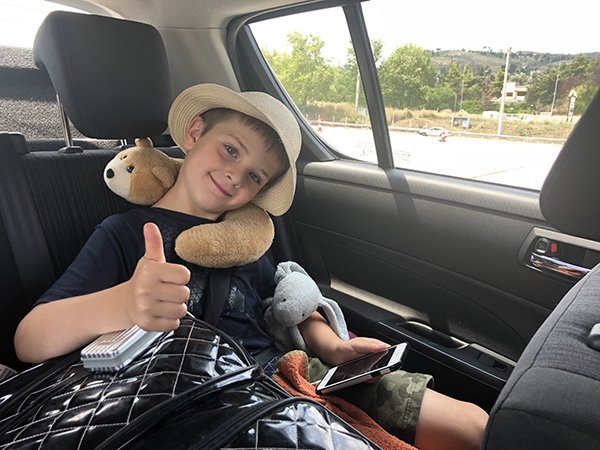 Athens to Meteora by Car

When you check Google Maps, note that Kalampaka is also sometimes spelled Kalambaka or Kalabaka which confused the hell out of me! Google Maps also uses Greek most of the time, and I wonder why we cannot use the Greek way to spell cities, not the anglicized version. Like Athens, for example, on the road signs and maps, says Athena in the English Alphabet, but also has it in Greek. Why do we not call it Athena? Who knows!

Athens to Meteora by Train

Greece is a great country to travel without a car. It is possible to get to Meteora from Athens by train quite easily. You need to get to the Larissa station, which you can get to on the metro line, and then get a ticket to Kalabaka. As I mentioned above, the main town beside Meteora is called Kalampaka, Kalambaka or Kalabaka.

If you are coming from the Athens airport, you can get on the Metro Blue LIne, it costs 10 Euros per person (children are free), change at Syntagma station to the Red line heading towards Anthoupoli and get off at the Athens Railway / Larissa Station. 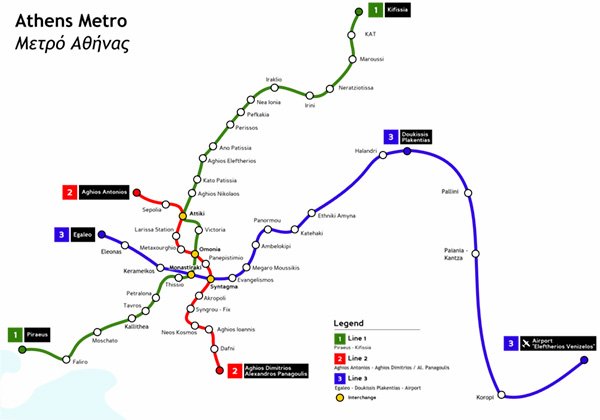 If you are arriving by plane, take the Blue Metro line (which costs 10 Euros – only the airport part is expensive, otherwise the metro is quite cost effective), and get off at the Syntagma station. Transfer to the Red Line, and get off at Larissa Station

Tomorrow we fly off for 2 days in Santorini and blue skies await! We booked another AirBNB and since we have a car, we can drive to the airport ourselves in the morning. The Athens airport has 24 hour car rental desks which is handy, because our flight is early in the morning! We plan to visit Thessaloniki and I am hoping that we can take a cruise around Symi Island too!

Any questions about Meteora or arriving into Greece, let me know!

If you are looking for more Athens information, check out this post on Historical Athens. 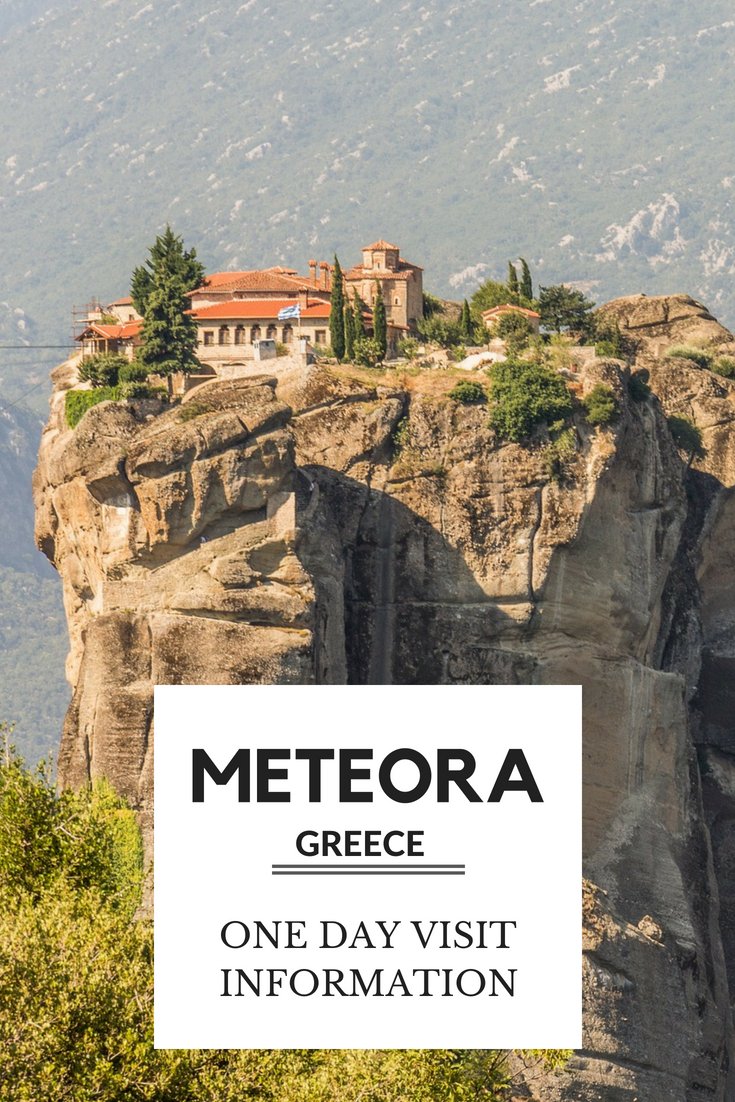 What was the name of the hotel you Stayed at in kalampaka? We are going to Meteroa for the day/ overnight and looking for a good place...

Hi Ashely, We stayed at the Edelweiss Hotel. Location was nice! We chose it also because of the pool!