last month we were fortunate enough to be able to visit the West Bank. I have fallen in love with the Middle East over the last few years and have taken my boys (who are now 7 and 5) from Canada to the Middle East at least once a year since 2016.

Visiting the West Bank on a Tour with Abraham Tours

This year, it was a visit to Israel and the West Bank of the Palestinian Territories. While in Israel, we spent our time in Jerusalem, you can read about it here if you want an idea of what to do and what not to do in Jerusalem. Or if you are interested in the types of souvenirs you can buy in Israel, you can check out this post.

The biggest question that circulates online is the “Israeli Passport Stamp” issue. If you do not know what it is, you have not spent much time reading about people’s travel in the Middle East.

Let me tell you from personal experience. The ISRAELI PASSPORT STAMP IS A NON ISSUE! They do not stamp passports. You do not need to ask them not to stamp it. They just do not do it. So do not worry about it. If you want to dig into crossing by land in or out of Israel, that is up to you, but I have not seen one post about a missing Jordan Exit stamp (they do not stamp that you leave Jordan and go to Israel either) or an Entry stamp from a land border as an excuse to visit other Middle Eastern Countries. Feel free to do your own research on this one. I will touch on it later when I plan to visit Lebanon.

There will be more posts coming about crossing from Jordan to Egypt by land, with what to expect and how to do it etc. I will update this post with a link when it is done!

Now back to the West Bank.

When researching tours from Israel to the West Bank, Abraham Tours often came up as one with good reviews and positive feedback. It is designed for solo travellers and those who do not want to invest in a private tour. We decided to take their “Best of the West Bank” tour while in Jerusalem. ( You can also take it if you are in Tel Aviv. Check it out here. 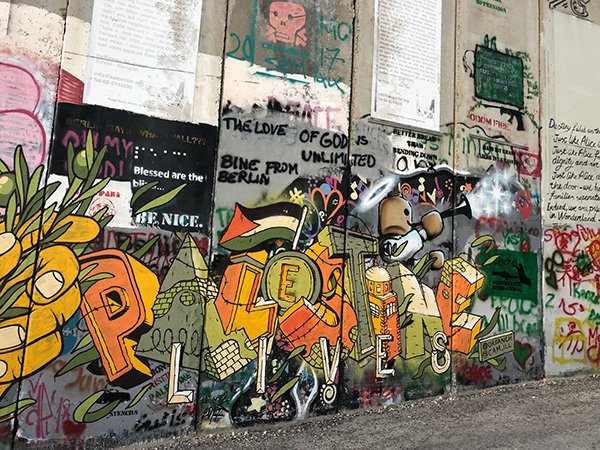 The Wall in the West Bank is covered in Amazing Art, but its ominous size and watch towers cannot be unseen

The Tour starts early with a pickup from the lobby of Abraham Hostels. It is pretty chaotic, I will tell you that, as there are many tours that leave from the hostel and often multiple busses waiting. The tour includes a visit to Ramallah, a modern city in the West Bank, a visit to the ancient city of Jericho, a chance to dip your toes in the Jordan River near where Jesus was baptized, and a visit to Bethlehem where Jesus was born.

It is an all day tour, and depending on your guide, the order of where you go and when may chance. For example, we did Ramallah first and then Jericho and the baptism site where on the tour website it has the baptism site first! Regardless of the order, the tour guide and driver are often the best person to determine where to go and when since it is something they do everyday!

I wondered how it would work out with a driver and guide, as it is difficult for Palestinians to get into Israel and was wondering how a Palestinian tour guide would do this. Well here is how it happened. The tour organizers at Abraham Tours ensured everyone was on the bus and then the driver left. Our driver is a Palestinian who lives in Jerusalem and those Palestinians have special access to Israel and Palestine. Our tour guide was picked up once we crossed into Palestine and then we left him at our last stop in Bethlehem, close to where he lived. Pretty simple!

Despite the tensions in Gaza and the fact that they were looking for someone who had killed a member of the IDF two days prior, there was no wait or border control when entering and leaving Israel into the West Bank (and back). I expected a lot more security. When we returned to Jerusalem at the end of the day, security initially got on board and look a look at the bus and then got off, satisfied that we were all tourists. 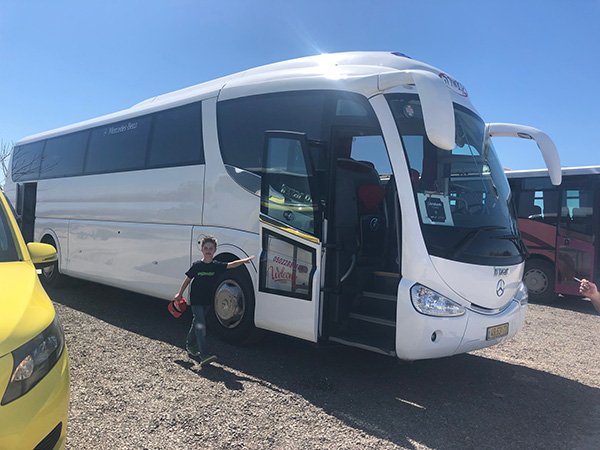 Abraham Tours uses a coach style bus with air conditioning. This gives you an idea on the size of the tour. Ours had 30 people but it depends on how busy they are as to how full the bus is.

Our first stop was the modern city of Ramallah, which looked like any other typically Middle Eastern modern city. There were plenty of cars on the street (and people) and we saw a “Stars and Bucks” which I would have liked to have time to enjoy a coffee in! We had icecream in a local shop and tried some oval shaped falafel before we visited the tomb of Yasser Arafat. It was interesting to hear how he was thought of by his people and his efforts towards Peace!

My biggest take away in Ramallah is how well everyone spoke English. You could tell that they had been taught by a native English speaker. I found out that thanks to the UN’s help with the refugees since 1948 that the Palestinians are one of the most educated groups of people in the Middle East and many go to study abroad after they finish high school in the West Bank.

Ramallah With Kids: Although most of our tour was walking the streets, the kids were keen to have some ice cream and try the falafel. A few people stopped to talk to them and welcome them to Palestine (something that happens a lot in the Middle East) and everyone we saw was very pleased to have us visiting their country. 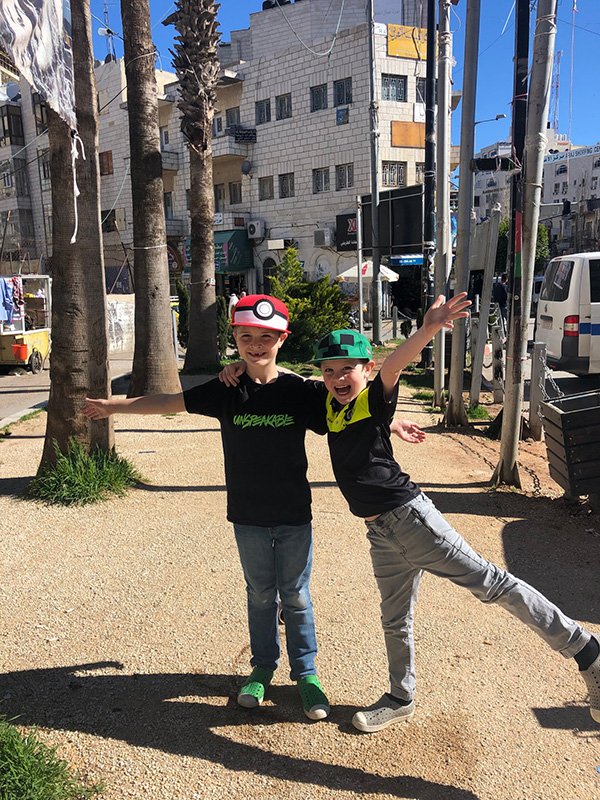 Visiting Ramallah with Abraham Tours was like landing in any other large city in the world! Lots of shops, lots of people, lots of cars!

The Jordan river is the border between the Palestinian Territories and the Hashimite Kingdom of Jordan (You can read more about Jordan on my Jordan Travel Blog section). Hundreds visit this site (on both sides of the river) each day. While Jesus was actually baptized on the Jordan side and up a small tributary, this area is an important spot for Christians.

The water was quite high when we visited, making it easy for my boys to dip their toes while listening to our Tour Guide.

Jordan River Baptism Site with Kids: My youngest is up for anything and was the first to get his socks and shoes off to dip his feet into the water. It can get muddy so pack a few wipes and some hand sanitizer. 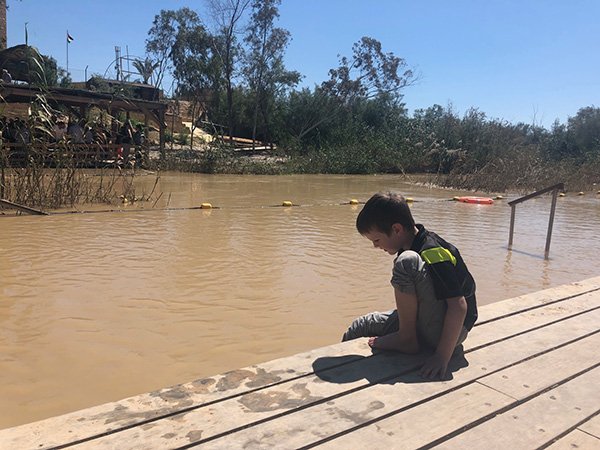 I was intrigued to visit Jericho as I have seen it from across the Dead Sea while in Jordan. While we did not have a lot of time here, we visited the ancient sites, as Jericho is known as the oldest city in the world. There are excavations here dating back 11 000 years to 9000 BC.

Jericho with Kids: While our time in Jericho was limited to the archaeological site, there is plenty for the kids to explore. Point out the ancient walls and let them carefully explore the site (sticking to the paths). If there is time, there might be a camel to ride! 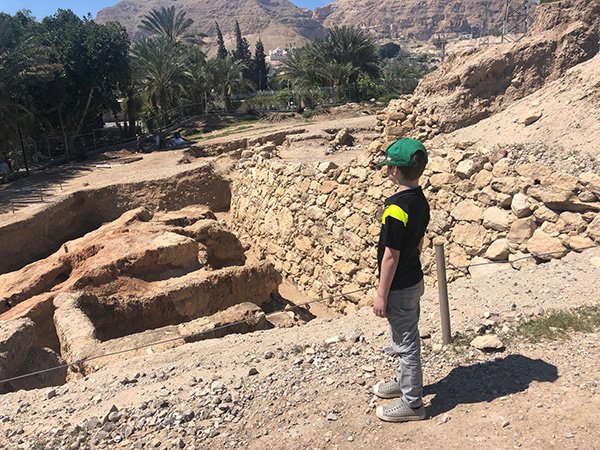 Exploring the ancient site of Jericho with remains dating back to 9000 BC. This is one of the oldest cities in the world

My first impression of Bethlehem was how BUSY it was. But mostly full of tourists who had come on busses to the Church of the Nativity. the streets were narrow and packed with people. The church was bursting at the seams with lineups of people wanting to visit the site where Jesus was born. Overall I think it is well worth a visit, and get down into the caves under the churches.

The best part of visiting Bethlehem on a tour was hearing the story of the nativity from an ancient perspective. With things “lost in translation” and other versions of the Christian stories, I loved soaking in the perspective of someone from another culture compared with the westernized stories I am used to hearing.

Bethlehem with Kids: My kids were fascinated with the thought of Jesus being born in a cave and loved the local market. It was busy and crowded so be prepared for that! 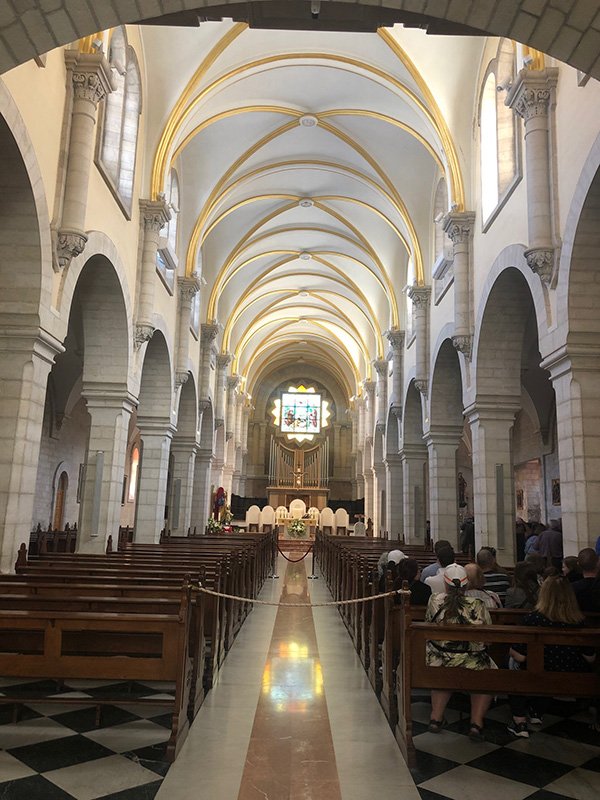 the Church of the Nativity in Bethlehem

What to Pack for a Tour of the West Bank

There are a few things to pack for your day tour of the West Bank but most are common day tour items! Have a peek at the list below: 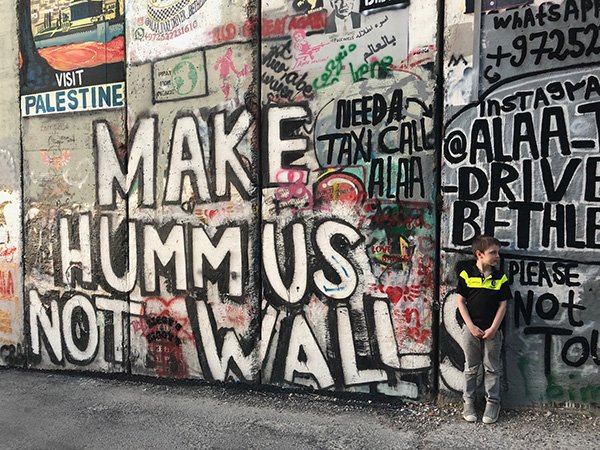 Palestinian Wall Art outside the famous Walled off Hotel in Bethlehem

Things to buy while in the West Bank

When I travel, I like to support local economies as much as possible. The best way to help Palestinians is to buy locally made products (like olive wood carvings), eat in their restaurants and to refrain from buying goods that were made in the illegally occupied settlements. You can read more about what to buy in the West Bank. 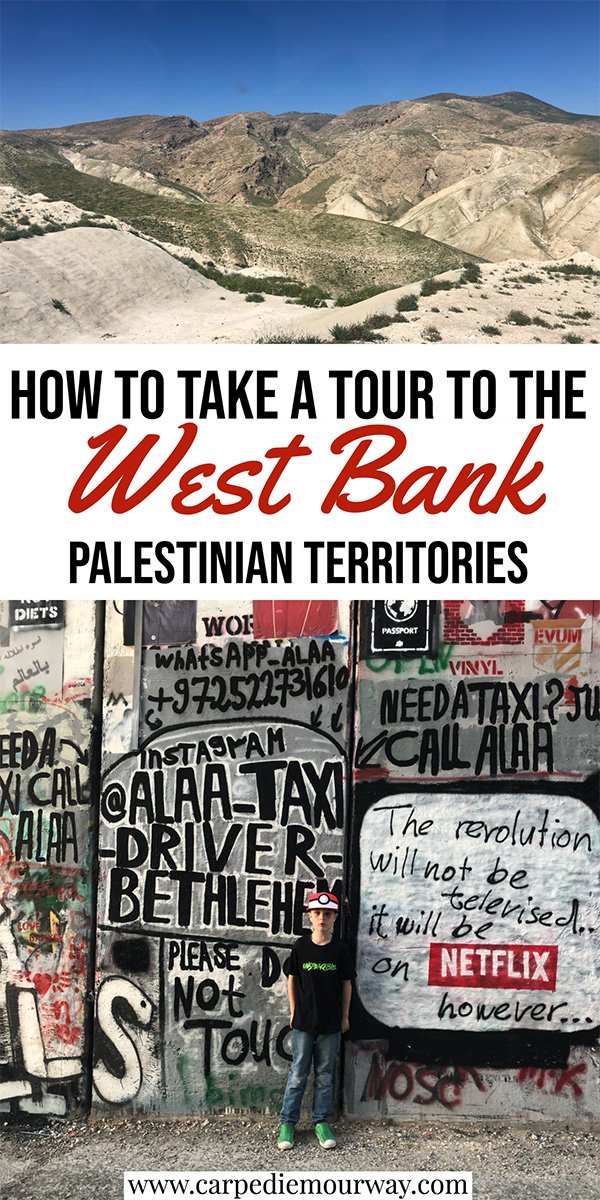